The remotest hotel in Mainland Britain has new owners. According to Forbes Magazine, the Garvault is not only the most remote on mainland Britain, but one of the ten most remote in the world. That’s some claim, and not one I feel should be put to the test, but still, it helps make the point: Eva and I, along with our friend Betty are the owners of a pretty remote place.

Remote but not isolated. On our second day, we met Mark the Postie, doing his daily round from Bettyhill, thirty miles north. After chatting for a while, we were confident that by teatime half the county knew that the Garvault had been taken over by the 'Triple A Team': the Anglo-Austrian-Americans.

For anyone who does not know Britain, the most remote part means northern Scotland, above Inverness, in the county of Sutherland. Known as the Flow Country, the bleak rounded hills and frequent lochs and lochans were formed by the last ice age. Apart from some ill-judged forestry efforts in the last century, it is largely unchanged. What little human habitation there is clings to the coast, in such small towns and villages as Dornoch (Madonna’s castle, Skibo is nearby), Bora & Clynelish (whisky distilleries) and Helmsdale (a fishing village and our nearest shop). Head inland from Helmsdale for 25 miles and you will see in the distance a white speck on the bare hillside. Coming closer, you see it is a whitewashed building, surrounded by a cluster of dilapidated outbuildings. This is the Garvault.

On a sunny day like today, the views stretching for miles in all directions across barren hillsides, with a good imagination it could be the South African veldt. A little more imagination and, in autumn, the sound of the stags in rut could be the roar of distant lions….

This remoteness brings a certain self-sufficiency too. Not only does it have it’s own water supply off the nearby hill, and a reed bed soak-away sewage system, but the electricity is provided by a bank of batteries charged up twice a day by a generator.

Every night I go out to turn off the generator at around 10 o’clock. Sited some distance from the house due to the noise, it is a short walk away. On the first night, as I crossed over in the darkness, with the throbbing sound of the old diesel coming from the lonely generator building, I had a feeling of being in a typical Hammond Innes novel about wild or remote places. Or maybe an Alistair Maclean thriller as I half-expected a heavy spanner/wrench to come out of the darkness and hit me on the back of the head.  One can have too much imagination in a place like this.

On the return, in the now silent night, I stopped to look up at the stars. The milky way stretched like a celestial belt of jewels across the sky. Later, the same heavens would shine with the glimmer of the Northern Lights. 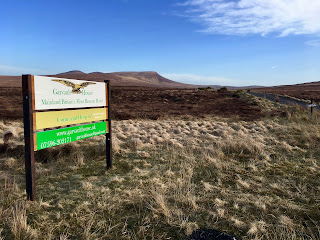 Posted by Garvault House at 4:50 AM