After two weeks had passed, we were still here, at Britain’s most remote hotel. A lot happened in the meanwhile, not all of it at the Garvault. Betty returned to the States as planned, but fully committed to join us again next year; we stopped over with family and friends in and around Edinburgh, bringing a little bit of chaos into their lives; and we agreed to buy some dinning room chairs from antique dealer friends near Inverness, but did not find the opportunity to collect them (Mike and Ben eventually delivered them five months later, but well worth the wait as they are so comfortable you could sit talking at the table for hours - and we often do).

The reason for not stopping to pick up the chairs, and for testing the patience of my sister and friends, was due to the venerable old Land-Rover 130 - the 'Green Knight' (actually more my stubborn refusal to buy a newer, boringly reliable vehicle).  The gearbox had packed up on the long run north and it had been left in Edinburgh to fit a reconditioned 'box. Unfortunately, no reconditioned gearbox was available, so we (I) took the risk of a second-hand one. Sometimes these things pay off, sometimes they don’t.  This time it didn’t and after only 50 miles I saw the transfer 'box dripping oil like a icecream in a sauna. More immediately problematic, the gear lever refused to go into reverse. With it’s poor turning circle, a Defender without reverse gear is like an ocean liner in a crowded port without a tug, but when pulling a trailer, it was like two ocean liners in a crowded port…. Which is why we could not stop to pick up the antique chairs.

Enough of the Land-Rover and mechanical stuff; more than enough for some of you I suspect. What about the Garvault I hear you clamouring to know? Does it rain all day every day? Is it really really cold? Are there any neighbours other than sheep? If so, are they friendly and do they speak english? Is it spooky, or is there a strange man lurking in the shadows with a spanner/wrench?

The Rain. After the West Coast of Scotland, anywhere is comparatively dry and sunny, and so it is here. In fact, we have only had a couple of days where we have felt disinclined to go for our afternoon walk, but even then it has cleared up enough to go out later. Early days I know, but encouraging. Nor is so cold; a Geordie would be happy here in a T-shirt and shorts. And there have been the most glorious sunsets. However, as anyone who knows this part of the world will tell you, it is windy. Apparently in Austria at the weekend people were advised to stay indoors due to storm force winds. Here, such winds are a regular occurrence and, on even a mild day, washing is blown dry before you have finished pegging the last shirt to the ¼ inch thick washing line. That is, if it hasn’t wrenched itself from the grip of the pegs and gone chasing sheep.

Sheep. Yes, there are sheep. Good looking North Country Cheviots. Most effective lawnmowers too. Being hardy hill sheep, they even trim the tufty grass around the stones, which is considerate of them. Deer, plenty of them as well, often mixing with the sheep in a friendly neighbourly way. Human neighbours? Ah. The nearest are not so far, about four miles away. Badanloch Lodge has a cluster of cottages as well as the lodge itself (currently let to an earl) and houses the Head Keeper, the Under Keeper, the Student Keeper and the Husband and Wife shepherds; the river gillies live elsewhere. We had a visit from the Head Keeper and his assistant last week and returned the call over the weekend.  Brian has been at Badanloch nearly 40 years and is a good man to know.

Eagles. We seem to have a resident eagle. All the usual superlatives apply when it is a golden eagle. I’ve seem plenty of eagles in Africa and there are sea eagles further down the strath, but the symmetry, as well as the size, makes the golden special.  Eva spotted him (her?) first, soaring over Ben Griam Mòr, before quartering the ground around the Garvault and then passing lazily away westwards towards Cnoc nan Tri-chlach and on to Ben Klibreck. Although the natives are english speakers, the hills obviously aren’t, the names a mix of gaelic and norse. From the prehistoric stone circles above the house to the ruins down by the loch, there seems to have been habitation at the Garvault for millennia. I bet if they could talk they would have a few stories to tell. Even ghost stories.

Ghosts? Not so far. Although there is a strange sound of a child’s swing in the small sitting room (soon to be the Library), which you cannot hear in any other room or outside…. but for a large rambling house in the middle of nowhere, the Garvault feels surprisingly un-spooky. It is Halloween, but I don’t expect anyone knocking at the door demanding 'Trick or Treat'. The chap with the spanner/wrench has not put in an appearance either. But you never know. It's late at night now, and I need to go and switch off that generator…. 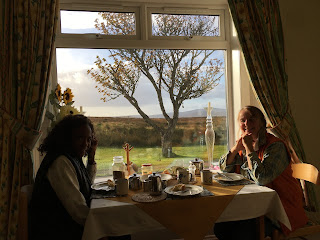 Posted by Garvault House at 7:27 AM