GARVAULT HOUSE DESPATCH No3: Joe, Winter and other Visitors

'Winter is Coming'. This expression, made familiar and sinister in the TV series Game of Thrones, catches an echo here at the Garvault as we had our first snow yesterday. For us, this will be our first winter so far north and all the signs (such as the extra large molehills indicating the maulwurf are digging deep to escape the cold above) are that it will be a cold one.  Despite my love of this bleak open country, I feel some nervousness about it’s effect when it’s bleakness extends to grey days where the sun hardly rises and the wind is so cold even reaching the generator hut might become a major expedition; let alone the one and a half hour drive to Thurso.  However, today we woke to a beautiful view of the snow covered hills around us, even our own 1,500ft Ben Griam Mòr is well covered down to the saddle, while the peaks of Ben Klibreck to the south and Ben Hope to the west stand out white against the bright blue sky as majestic as any alpine scene. Eva, ever the snow lover, is as happy as a seal in a salmon fishery.

Having gone on at length about the Green Knight in the last despatch, I won’t mention it this time; except to say Stuart at the garage in Kinbrace failed to fix the gearbox last week in the limited time he gave himself to do so (as I expected), so it is going in again on Monday. Meanwhile, we have been playing the game of not parking anywhere were we cannot drive out forward from. Easy enough when visiting the big supermarkets in Wick or Thurso (and they are big, full of useful kit too, acknowledging, perhaps, their role as general store to a far flung community), but when going into a builder’s yard to pick up the hired floor sander and some boarding, a little more tricky; particularly given the 130 Land-Rover’s ocean liner like turning circle. Thankfully, when needing to get out of the HSS yard in Thurso, we had Joe's extra muscle to push the hardly lightweight Land-Rover backwards.

Joe has proved invaluable as a handyman who is actually handy. With his long ponytail and laidback manner, Joe is someone who seems to have liked the hippy days of the 70s and has not bothered moving on. When he heard about the 'most remote hotel in Britain’, he was keen to escape the beautiful city of Vienna. It is beautiful, but Vienna is still a city and he was yearning for some peace and open space. Plus pure clean air. He has certainly found it in here in Sutherland: Scotland’s answer to the tundra. He is also good company as we sit talking in the evening after the day’s work has been done. Whether it is using the sanding machine or just providing the carrying capacity as we emptied out the Nissan Hut of so much junk (enough to keep the bonfire burning for days), Joe has more than earned his bed and board. When clearing out the Nissan Hut, I counted six old generators, which, adding the three working ones, makes a total of nine. Too heavy to move without a fore-loader, we could set up a generator museum in the Nissan Hut. Even with the generators, there is now space to house the Land-Rover out of the weather. Once it has reverse gear again, of course.

We had our first paying guest this week. Brian, Badanloch's Head Keeper called up and asked if we could take the chap who had been out stalking with him. My immediate instinct was to find an excuse not to, but reluctantly accepted this is not in the spirit of running a hotel, so said if he accepts the mess we are in and is happy to eat with us, of course send him up once he has cleaned his guns. Expecting some kind of typical huntin’ shootin’ fishin’ type, I was a little surprised to see turning in behind the Land-Rover a black Porsche with a private number plate and, stepping out a tall and trim man of about 45.  Even more surprising was to find Dave was ex-RAF (now a British Airways pilot). I learned this in the first couple of minutes as the old joke: "how do you know if someone is aircrew? Because it’s the first thing he tells you" always applies. After some gallant use of his german with Eva, Dave took off with the conversation at a fast lick, making sure it was all centred around himself. While partially true, this is unkind as he proved good company. We found mutual interest, not in the RAF (in which I have very little interest), but in Syria and Lebanon, Sutherland and Scotland generally. It was after two o’clock before he stopped talking and, helping him bring in his rifles, we headed off to sleep. Ah yes, Dave’s rifles. While the one was an unremarkable and workmanlike plastic-bodied .308, the other was twice as heavy, but thrice as powerful and with frice the range: a modern British Army sniper’s rifle. Capable of taking out a Taliban at over a mile in Afghanistan (and currently holding the record for the longest kill of any sniper), it seemed a little excessive for a hind at 200 yards. But that was Dave and his rifles; and our first guest. 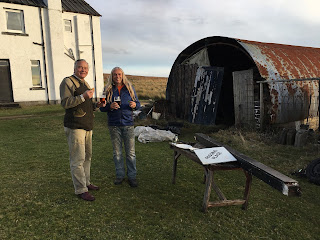 Posted by Garvault House at 7:39 AM